Featuring the songs of Michael and the Jackson 5

The Legend Lives On!

Toured to over 28 countries

THRILLER LIVE, a spectacular concert production that celebrates the music of the world’s greatest entertainer, Michael Jackson and the Jackson Five has played in London’s West End six capacity years since 2009, and last month entered the record books as the 20th longest running musical in West End history.

THRILLER LIVE premiered in Australia in Perth on 10 December, then toured nationally to Adelaide, Brisbane and Melbourne. Now it heads to Sydney from 26 February!

THRILLER LIVE is over two hours of non-stop hits from pop to rock, soul to disco in a show that pays homage to Michael Jackson’s legendary live performances and the magic of his 45-year musical history.  THRILLER LIVE features stunning choreography and Michael’s innovative dance moves executed with flair, precision and passion in a show that fans will never forget.

Two of the stars on this tour will be Australian’s MiG Ayesa and Prinnie Stevens who have just performed the roles in the West End, London.  MiG Ayesa has a huge list of achievements as a stage and concert performer here in Australia and around the world.  He finished third in the global hit TV show Rock Star:INXS, and released his self-titled debut album, ‘MiG’, through Decca/Universal.  He went on to star in many West End musicals including We Will Rock You, Rent, and in THRILLER LIVE and his Broadway credits include Burn The Floor and Rock of Ages.  Back in Australia, he played in Grease, Cinderella, and in West Side Story, and toured Australia and Asia with The Music of Andrew Lloyd Webber.

Prinnie Stevens is one of Australia’s most sought after performers – an incredible singer, dancer, songwriter and presenter.  Prinnie burst on to the scene at 17, performing in the Australian premiere of Rent: The Musical; Leader Of The Pack and Footloose.  This was followed by her Helpmann nominated performance in Oh, What A Night!  Following a stint in New York Prinnie auditioned for The Voice and made the top 4 in Team Joel.  Last year Prinnie appeared on Celebrity Apprentice and joined Universal Music as a Solo Artist and released single “Don’t wake me up”.  Earlier this year, she was Co Host on The Voice Kids and recently released EP “One night” that debuted at #13

THRILLER LIVE contains all of Jackson’s favourite songs including: I Want You Back, ABC, Can You Feel It, Off The Wall, The Way You Make Me Feel, Smooth Criminal, Beat It, Billie Jean, Dirty Diana, Bad, Rock With You, They Don’t care About Us, Dangerous, Heal The World, and Thriller plus many more!

“This theatrical extravaganza is a breathtaking celebration –

quite literally thrilling” – The Stage, UK

THRILLER LIVE combines high-energy choreography and dancing, eye-popping video footage and a myriad of effects.  Plus dazzling costumes, sequins and hot pants, not to mention that signature white suit and glove.

THRILLER LIVE was originally conceived and created by Adrian Grant, a long-time associate of Michael Jackson, and author of Michael Jackson – The Visual Documentary. The Australian tour of THRILLER LIVE is produced by Ambassador Theatre Group, The Flying Music Company, BB Promotion and Lunchbox Theatricals in association with Key Concerts and Adelaide Festival Centre.

THRILLER LIVE continues to moonwalk around the world, taking audiences on a visual, audio and electrifying journey through Michael’s illustrious career.  This two-hour bonanza of non-stop hits has everyone shimmying in their seats.

“Immensely enjoyable.  This is great stuff. A wonderful catalogue of pop music

at its best” – The Independent, London

“If you have a pulse you must go and see this show.  It’s the freshest,

“Thriller Live is an astounding tribute to Michael Jackson’s career” 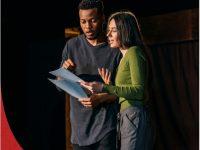 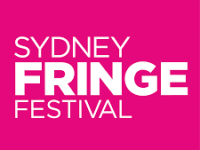 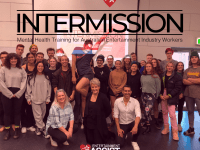 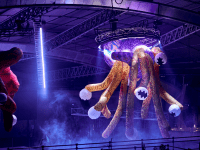