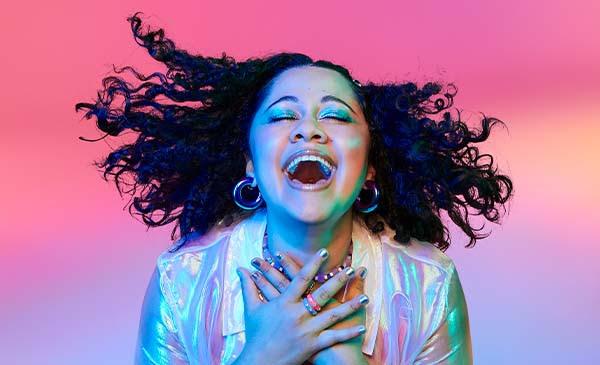 The smash-hit musical sensation FANGIRLS, which celebrates the misunderstood power and passion of teenage fandom, will be presented in the Opera House’s Drama Theatre from 28 July – 4 September, 2022. The critically-acclaimed Australian musical returns to Sydney after sold-out seasons at Belvoir and the Seymour Centre, which garnered an ARIA nomination (Best Original Soundtrack or Musical Theatre Cast Album 2021) and Winner of Sydney Theatre Award for Best Mainstage Musical 2019.

Written by award-winning playwright, screenwriter and composer Yve Blake and directed by Paige Rattray, FANGIRLS follows the story of 14-year-old Edna who is enamoured with Harry, the lead singer of global boyband sensation True Connection. When the band announces an Australian tour, Edna’s smarts and commitment will be put to the ultimate test in the pursuit of meeting her crush.

Rising star Manali Datar will take to the stage in the lead role of Edna after having previously appeared as Rose Granger-Weasley in the 2019 production of Harry Potter And The Cursed Child. Born in India, Datar is a graduate of the Victorian College of the Arts.

Yve Blake, whose 2019 TED talk about unbridled teenage enthusiasm has garnered 1.3m views, said: “I am peeing-my-pants-level excited that FANGIRLS is returning for the third time. I wrote this show for my 14-year-old self, but this is not just a show for teenagers. This is a show for anyone raising a teenager, anyone who knows what it’s like to feel the pang of a first crush, or anyone who’s been missing the feeling of seeing your favourite band in concert and cheering with your whole chest. The show may be called FANGIRLS, but it’s about so much more than fans or girls, and that’s really been reflected in the audience response. Last year, we saw people of all ages come to this show, and then, we started to see people coming back again and again and again. We started to see people arriving with handmade signs for the fake boyband in the show, and even custom jewellery and jackets emblazoned with lyrics from the score. But it wasn’t just young people who fell in love with the show, I’ve met dads, and even grandads who have seen the show more than once. I’m pinching myself that we get to bring this show to the Sydney Opera House, and I can’t wait for our audiences to see the jaw-dropping new cast we’re assembling!”

“The resounding success of this contemporary musical speaks volumes to its calibre and the insatiable audience appetite for new stories told by Australian voices. Yve’s masterpiece invites those of all ages to connect with their inner fan and celebrate the passion, loyalty and inspiration that comes with it”, says Sydney Opera House Head of Contemporary Performance, Ebony Bott.

FANGIRLS has music, book and lyrics written by Yve Blake and is directed by Paige Rattray (Death of a Salesman, Triple X). The performance on Thursday 11 August at 11am will be exclusively available to schools as part of the Opera House’s Creative Learning program.