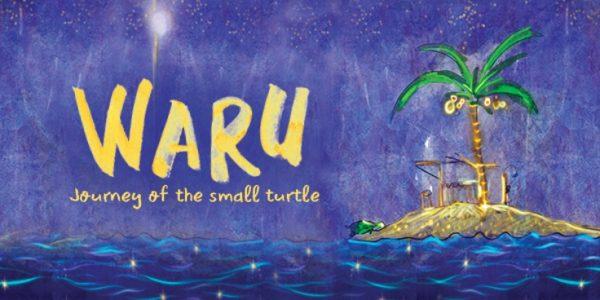 Waru – Journey of the Small Turtle

Australia’s leading Aboriginal and Torres Strait Islander performing arts company, Bangarra Dance Theatre will present their first ever dedicated work for children Waru – journey of the small turtle. Making its world premiere at Bangarra’s newly renovated home in Walsh Bay from 24th September to 9th October, Waru is a must-see new Australian work for kids ages 3 and up and their families.

A journey of survival and discovery with our heroine Migi the turtle, the contemporary saltwater Lagaw Kazil (Island Children) story is inspired by the totemic system of the green turtle, in an interactive and immersive introduction to Torres Strait Islander culture and dance for three to seven year-olds. Under the star-illuminated skies of the Torres Strait, a green turtle navigates her way back to the beach where she was born. The season has started, the turtles are returning to nest, and soon the island will welcome a new generation of hatchling – amongst them, our small turtle friend, Migi.

Waru is created by Bangarra’s Artistic Director and multi award-winning choreographer Stephen Page, together with Hunter Page-Lochard (ABC TV’s Playschool, Spear, ABC TV’s Cleverman), and Bangarra alumni Dancers and Choreographers Sani Townson and Elma Kris, who recently starred as the title role in the company’s lauded production of Wudjang: Not the Past.

Waru provides teachers, parents and care-givers with a unique opportunity to open up conversations about climate change, caring for the environment and the traditional cultural values of respect and reciprocity, and is also inspired in part by the highly successful Turtle (Corroboree) 2001, choreographed by Stephen Page, Peggy Misi and Elma Kris.

Waru writer Hunter Page-Lochard said: “I’m thrilled to be able to work with my father on a children’s show, especially now that I have a two-year-old daughter. Being a part of Playschool has given me an even greater appreciation of the importance of sharing culture with young people in Australia today, and I’m excited to be able to share the culture and stories of fellow creatives Sani and Elma with the youth community”.

Waru has been generously supported by the Girgensohn Foundation and the Restart Investment to Sustain and Expand (RISE) Fund, an Australian Government Initiative.

Waru – journey of the small turtle