Shelley Lasica: When I Am Not There 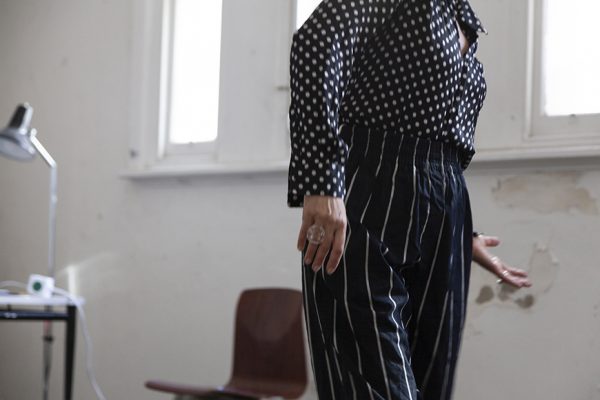 When I Am Not There

For two weeks only, WHEN I AM NOT THERE will see daily performances during museum opening hours, where eight dancers share MUMA’s gallery spaces with objects such as costumes, sculptures, video and sound compositions.

Consolidating ideas and experiments that Lasica has been developing throughout her career, WHEN I AM NOT THERE will contribute to discussions around choreography in gallery and museum settings and activate the tension between what it means ‘to perform’ and ‘to exhibit’.

Since her first solo works made in the 1980s, Lasica has experimented with the possibilities of dance, particularly by examining the various contexts in which it occurs. Her work has been presented in artist-run spaces, commercial galleries and museums as much as in conventional theatre spaces, nightclubs, rehearsal rooms and town halls.

Lasica’s particular interest in the institutions and contexts of art extends from her close engagement with other disciplines. Her body of work is uniquely characterised by the conversations it holds with the traditions and practices of theatre, fashion, installation, painting, sound, sculpture, literature, architecture and dance itself, to present a non-exclusive list. These conversations serve to create both a physical and relational infrastructure within her practice.

Shelley Lasica: WHEN I AM NOT THERE is realised as part of Precarious Movements: Choreography and the Museum, an Australian Research Council Linkage Project that involves the following partners: Art Gallery of New South Wales, Sydney; MUMA, Melbourne; National Gallery of Victoria, Melbourne; Tate UK; and UNSW Sydney. It provides this overarching project with critical and situated research focused on the curation and practice of choreography in the museum environment.

WHEN I AM NOT THERE will be accompanied by a substantial monograph published by MUMA and Monash University Publishing that features new writing from Erin Brannigan, Lisa Catt, Justin Clemens, Hannah Mathews, Claudia La Rocco, Robyn McKenzie and Zoe Theodore. Positioning Lasica’s oeuvre within Australian and international contexts and exploring her distinct methodologies, it includes a comprehensive chronology and extensive documentation drawn from her archive.

Shelley Lasica: WHEN I AM NOT THERE is part of a MUMA series that presents the work of influential Australian artists in depth.

Shelley Lasica is based in Naarm/Melbourne and has been working nationally and internationally for over four decades. Her practice has consistently engaged with the contexts and situations of presenting dance, choreography and performance. Interested in the collective and interdisciplinary possibilities of choreography, she performs her solo and ensemble works in dialogue with designers, writers and visual artists.

Presenting work in indeterminate spaces is also an integral part of her choreographic practice. Throughout her career, Lasica has organised and participated in numerous residencies, exchanges and mentorship programs in Australia and overseas. She teaches choreography to dance and visual arts students both independently and within institutions. In 2021, she received a prestigious Australia Council Fellowship for Dance.