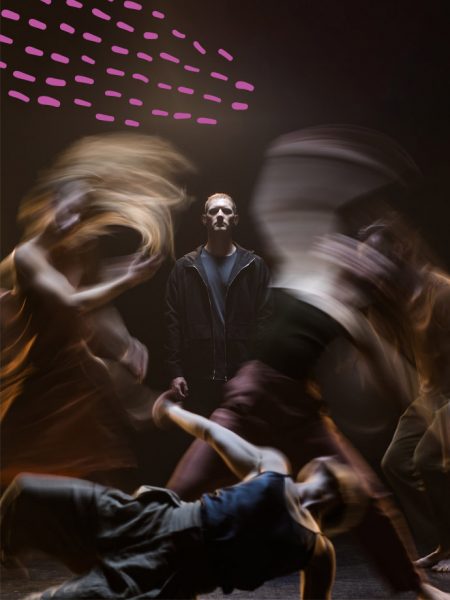 Premiering at the Brisbane Powerhouse in 2021, Aftermath’s sell out season received rave reviews. Visceral physicality and a stirring soundscape will again collide in this bold work co-created by Amy Hollingsworth and Jack Lister, as the formidable ADC dancers are joined live on stage by Harley performing his original composition.

Under his moniker The Kite String Tangle, Harley has achieved a string of awards, Gold-certified releases Given The Chance and Arcadia and is a prolific collaborator, having worked with Fat Boy Slim (UK), Clozee (France), Dustin Tebbutt, Lastlings, Woodes and Queensland Symphony Orchestra.

Set to a searing score, performed live by Harley, Aftermath opens into a haunting world of disquiet, both familiar and unfamiliar. Through a landscape of fragmented memories and imperfect recollection, we slowly piece together the events that have transpired, accelerating towards total recall.

A rousing aural, visual and sensory trip, audiences are hurtled through a cascade of events – arriving at a stunning climax. Part-gig, part-performance, it is an experience like no other.

“Aftermath has an entirely local creative team and cast and we’re absolutely thrilled to be a part of Brisbane Festival – it feels like a perfect fit,” she said.

What the critics are saying….

“one of the most compelling performances I have ever witnessed.”

“Aftermath is a complete immersive sensory experience and transports the audience from the banks of the Brisbane river to another time, where perhaps no one is happy, but good god can they move. ★★★★☆”

“The hour-long choreographic collaboration between artistic director Amy Hollingsworth and company artist Jack Lister, propelled by Danny Harley’s epic live sound mix, grabs you by the throat and never let’s go. It consciously loosens its grip slightly in sections, but the intensity of Aftermath’s force field is unrelenting.”