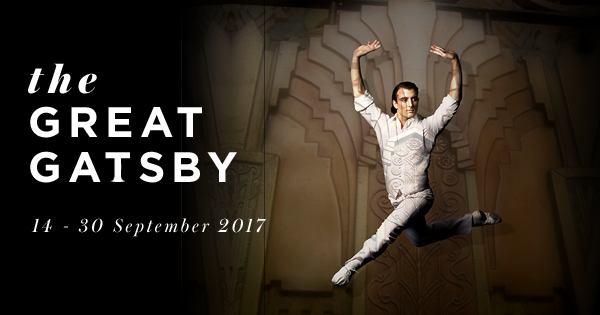 Australian Premiere of The Great Gatsby

A New, Neo-Classical Ballet of a Classic Story


This month will see the Australian premiere by the West Australian Ballet of David Nixon’s new ballet version of F.Scott Fitzgerald’s classic novel – The Great Gatsby. We spoke to artistic director Aurélien Scannella while rehearsals were underway ahead of the September 14 opening night about why he has chosen this particular ballet for the WA Ballet, the direction he hopes to take the company, and why The Great Gatsby is the perfect ballet experience for all audiences.
David Nixon OBE, renowned artistic director and choreographer with the Britain’s Northern Ballet, has built his reputation for delivering clever, visually stimulating, modern-day, storytelling ballets set against rich and lavish productions that blend styles and stories for today’s audiences. This is the first time The Great Gatsby has been performed by another dance company, and outside of the UK, so Nixon has personally been involved in its efforts to bring it to the Australian stage. Read our previous article on The Great Gatsby here.
Interview by Heather Clements
***

“David Nixon is probably one of the best storytellers in ballet. It’s not easy to tell a story with classical ballet steps, it’s quite rare and he has that talent. For me, I’ve always thought that ballet is really for everyone… I want everyone to sit down and watch what’s happening on stage and just be able to follow and understand the story. Some choreographers can be really complex in the way they are trying to interpret the story. Even if you are a so-called ballet expert you sometimes don’t understand what is going on on stage. This is something I try to avoid so everybody, especially those who will come for the first time to watch ballet at The Great Gatsby… I don’t want them to leave the theatre with a headache because they’ve been trying for two hours to understand the story!

“I am trying to introduce Perth to new types of ballet. In the past when I’ve done a little known ballet or something more contemporary, the audience was a bit unsure. So what I’m trying to do now is bring them a title like The Great Gatsby or Beauty and the Beast which is not 100% classical ballet, or a true a contemporary ballet, but it still has the beautiful sets and costumes and the stories are more familiar. I’m trying to bring it into a different way of telling the story, I think there are lots of different ways to tell the same story. There is a very classical way but there is also a more modern way to tell the story and that’s why I’m trying to bring to Perth.”

Q:  This is the first time another company (aside from Nixon’s Northern Ballet) has performed The Great Gatsby outside of the UK is that correct? How did you make this happen?

“David was here last year when the WA Ballet performed his version of Beauty and The Beast… we had talked about doing The Great Gatsby for a long time. I wanted to do it, especially because the new movie version had recently been released (2013) so people would be familiar with the story… and it’s a new ballet … it’s freshly choreographed, and I wanted to do the Australian premiere.”

Q:  The Great Gatsby is set to an original score by Richard Bennet – can you describe what the music is like and how does it fit with the Gatsby story especially as the audience won’t be familiar with it?

“Actually when you watch the ballet you would think there may be 4-5 different composers doing the music as each scene has a different style. And there is a lot of music in the style from the 1920s like honky-tonk and the Charleston which people will be familiar with. There is a tango scene, and a very contemporary moment set to only percussion. It’s very diverse, very different, but most of the big music score is used for the group scenes and parties in the house… So it will be easy for people to really imagine themselves in the 1920’s in New York.”

Q:  As it is set in the glamorous, indulgent 1920’s era in America, how does the choreography reflect this? Is it a neo-classical style, is it a combination of a fusion of styles. How do you translate that 1920’s style and feel into the ballet choreography?

“I would say it’s a neo-classical ballet, but it is a fusion of many styles. For example, there are Charleston steps worked into the choreography and there is a very hot Argentinian-style tango. Actually, with the amazing costumes in The Great Gatsby the whole production makes you imagine you are in a movie production.”

Q:  How closely did you work with David Nixon on this production?

“David Nixon came here in June and for two weeks with two of his assistants. It was a very intense two weeks trying to stage the most material possible. Then he will return in August three weeks before opening night. Dave likes to stage his ballets himself when he goes with a different company so he likes to come here to make his casting and to stage the ballet. He particularly likes to work with the principles as well, which I think is great because a lot of choreographers they don’t really enjoy the process of re-stage and mixing work with another company. David and his team insist on being here for these six weeks which is fabulous because he is the creator, he is the choreographer, he is able to give meaning to the steps he’s choreographed. So the dancers are not just re-creating it, they understand why they are doing this movement or that movement on such moment of the music. So it’s very intense when he is there, but it’s great for the dancers.”

Q:  How will Australians relate to this very classic American story? And how will it challenge them?

“I know there is already a real excitement in the city about The Great Gatsby coming. As soon as you talk to people about the 1920’s or the 30’s you see sparkles in people’s eyes because you imagine immediately it as being a period of time where people really enjoyed life after the war and there was great optimism in society.

“I don’t think there will be any challenges for Australian audiences in this ballet. As I said it’s a story many people will know already and it’s easy to follow … especially with the beautiful sets, costumes and music.”

Q:  Why should people go and see this different style of ballet?

“I would say don’t be afraid by a different style of telling the story because at the end of the day it’s pure ballet. It’s a neo-classic way of telling a story, you’ve got the beautiful sets and costumes and there’s absolutely no challenge for the audience to have a good time. They probably will have a different experience… but it’s a nice experience.”