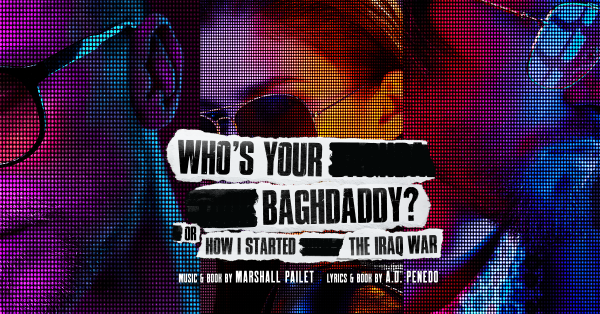 During the current Covid-19 restriction, the arts community has been compelled to move their creativity online due to the inability of people to attend theatre productions. Now comes the first season of a stage musical reimagined to be performed online:  WHO’S YOUR BAGHDADDY (OR HOW I STARTED THE IRAQ WAR) will be performed online from 24 to 28 June for five performances only.

Presented as a support group for people who started the Iraq War, this dark, boisterous and irreverent story follows a handful of mid-level spies whose vanity and office politics contributed to the worst intelligence blunder in modern history. The Australian Premiere of this 2017 hit Off-Broadway musical will be presented by Curveball Creative and directed by Neil Gooding. 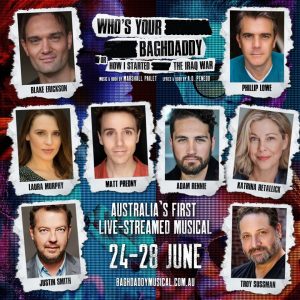 Who’s Your Baghdaddy will be performed and streamed completely live every night for 5 nights. We will be taking over a house with each actor having their own room, camera and microphone. All of these feeds will be come to a central computer in the house and from there will be streamed out across Australia. We have an incredible group of creatives and crew to handle this ambitious undertaking so that we can keep the flame of live theatre alive.

The musical is set in an ‘AA-style’ support group meeting for people who believe (or don’t want to believe) that their actions lead to the start of the Iraq War. The story focuses on the recruitment and eventual disgrace of an Iraqi defector, codenamed ‘Curveball’, and the use and misuse of his testimony by the CIA, State Department and Bush Administration. In the show, as in reality, Curveball provides Western intelligence agencies with false intelligence on Iraqi mobile weapons laboratories. This intelligence, which is later discovered to have been fabricated, was used by Secretary of State Colin Powell in his 2003 speech to the UN Security Council to justify the invasion of Iraq and overthrow Saddam Hussein.

Inspired by a true story, WHO’S YOUR BAGHDADDY (OR HOW I STARTED THE IRAQ WAR) is a satirical musical comedy with music and book by Marshall Paillet, lyrics and book by A.D. Penedo, based on an unproduced screenplay by J.T. Allen. The show was produced Off-Off Broadway at the Actor’s Temple in 2005 and Off-Broadway at the St Luke’s Theatre in 2017.

Producers Keith Muir, Sam Ducker and Steven Kreamer are thrilled to be producing the Australian Premiere. They said, “WHO’S YOUR BAGDADDY (OR HOW I STARTED THE IRAQ WAR) is a reflection of how people in power, no matter what level in government, shape and form our world and the importance of keeping them accountable in times of crisis.

“This production allows us to create an online replacement to a live theatre experience as the musical perfectly suits itself to the medium of Live Stream. The narrative construct is a support group meeting, and in the real world right now these are taking place in “Zoom” style meetings. This show will reflect that by embracing streaming and video technology and be presented live every night over the course of a week, tickets being sold for audiences to watch from the comfort of their own homes. The aim is not to try and recreate a stage production on film or a feature film. Instead the aim is to use the aesthetic of our current online interactions as the framework for creating a new theatrical experience.”

“DON’T LET THE TITLE TURN YOU OFF. IT’S AN HILARIOUS, CREATIVE, CLEVER, INSPIRING, FRESH BREATH OF AIR WITH A SCORE THAT I WOULD BUY RIGHT NOW IF I COULD. THE SHOW IS AS TERRIFIC AS, DARE I SAY IT, HAMILTON.” – Times Square Chronicles

WHO’S YOUR BAGHDADDY (OR HOW I STARTED THE IRAQ WAR)

Wednesday 24 – Sunday 28 June @ 7.30pm
Once you have booked your ticket, you will receive an email with you personalised link to the Livestream.
Tickets: $22
Bookings: www.baghdaddymusical.com.au