Satirical Musical Extended for On Demand Until July 12

Who’s Your Baghdaddy? ( Or How I Started the Iraq War)

The producers of Australia’s first musical theatre show performed live online have announced that due to popular demand, a recording of the show will be released on an ‘on demand’ basis for a two week period. From Monday 29 June, WHO’S YOUR BAGHDADDY? (OR HOW I STARTED THE IRAQ WAR), which was performed online from 24 – 28 June for five performances, will be available to view until Sunday 12 July through www.baghdaddymusical.com.au. Tickets will be on the same sliding scale as the live performances, starting from $22, with any added donations split between the Actors Benevolent Fund of NSW and the cast and crew.

Presented as a support group for people who started the Iraq War, this dark, boisterous and irreverent story follows a handful of mid-level spies whose vanity and office politics contributed to the worst intelligence blunder in modern history. The Australian Premiere of this 2017 hit Off-Broadway musical is presented by Curveball Creative, is directed by Neil Gooding and stars Blake Erickson (Shrek), Doug Hansell (Come From Away), Phillip Lowe (Georgy Girl), Laura Murphy (Muriel’s Wedding), Matthew Predny (Kinky Boots), Adam Rennie (The Rocky Horror Show), Katrina Retallick (Come From Away) and Troy Sussman (Aladdin). It is choreographed by Leah Howard. 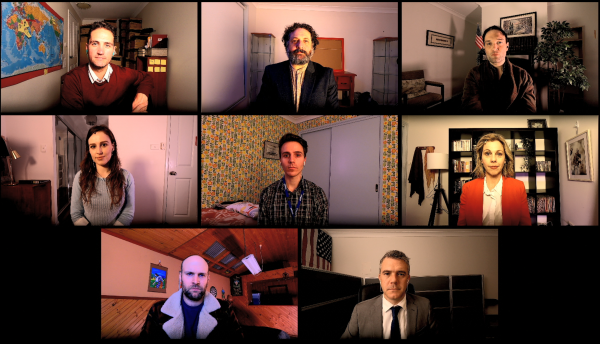 The musical is set in an ‘AA-style’ support group meeting for people who believe (or don’t want to believe) that their actions lead to the start of the Iraq War. The story focuses on the recruitment and eventual disgrace of an Iraqi defector, codenamed ‘Curveball’, and the use and misuse of his testimony by the CIA, State Department and Bush Administration. In the show, as in reality, Curveball provides Western intelligence agencies with false intelligence on Iraqi mobile weapons laboratories. This intelligence, which is later discovered to have been fabricated, was used by Secretary of State Colin Powell in his 2003 speech to the UN Security Council to justify the invasion of Iraq and overthrow Saddam Hussein.

Inspired by a true story, WHO’S YOUR BAGHDADDY? (OR HOW I STARTED THE IRAQ WAR) is a satirical musical comedy with music and book by Marshall Paillet, lyrics and book by A.D. Penedo, based on an unproduced screenplay by J.T. Allen. The show was produced Off-Off Broadway at the Actor’s Temple in 2005 and Off-Broadway at the St Luke’s Theatre in 2017.

WHO’S YOUR BAGHDADDY? (OR HOW I STARTED THE IRAQ WAR) has proven to be a hit, garnering much critical and audience praise. Don’t miss this extraordinary event – only until 12 July.

“The performers act straight to camera and are all excellent, balancing the satire with an authenticity that makes the characters’ various flaws feel believably human. Though you are watching the show on screen, the performers communicate with the energy of a live musical and you are swept up in the story – a story which still feels very relevant given its themes around truth and fake news. If you love musicals and are aching to see a live show, this is a wonderful substitute. Don’t miss it.” – Limelight

“WOW. Just WOW. I could actually leave it there but that wouldn’t do justice to this astonishing production…  The producers and whole team turned the calamity of COVID-19 into a triumph.” – Stage Whispers

“An unprecedented achievement in musical theatre that sets the bar incredibly high for any streaming production seeking to follow in its footsteps… This is perhaps the most entertaining (and beautifully lit) Zoom call I’ve ever been witness to. Such entertainment is due in no small part to the brilliant cast.” – State of the Arts

WHO’S YOUR BAGHDADDY? (OR HOW I STARTED THE IRAQ WAR)