Waiting for Phaedra: Emerging Contemporary Dancer-Choreographer is no Longer Waiting. 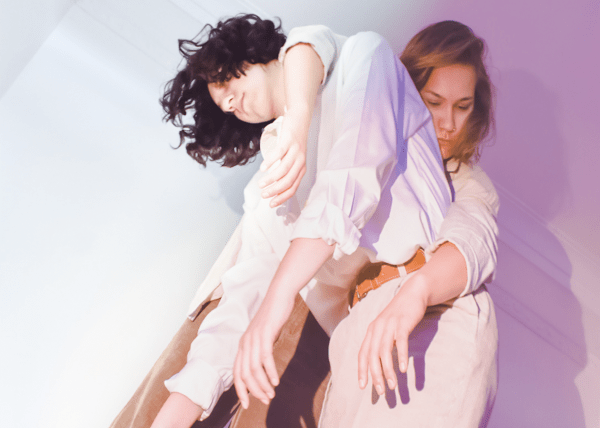 Waiting Game: She is Here

24-year old Phaedra Brown is a dancer-choreographer. She describes her practice as having a postmodern dance lineage. In an interview about her upcoming work, Waiting Game, she tells me, this lineage is not dissimilar to the absurdist movement you might find in Samuel Beckett’s play, Waiting for Godot.

In a rehearsal studio, an image of two women, one standing, one sitting flicks to an image of the two having switched places, the same woman sitting but the other splayed on the floor belly up. A metronome ticks in the background. The pair wiggle their feet or stroke their face as if bored. A third image of the two women standing side by side, heads turned to the left and stepping to the left sideways in even tempo appears as the music starts. The girl from Ipanema drifts into the space as the women execute different postures with their torso, arms and heads, all the while keeping their steady sidewalk to the left. Their bodies are quite literally keeping time, embodying the now-absent metronome.

Inspired by a collective sense of disillusionment, Waiting Game reflects the young creative team’s experience of the world right now, ravaged by extreme political climates and climate change leading to, notably, the pandemic. Brown has collaborated with fellow dancer Tamara Bouman who is interested in how the body can be used as a tool for learning and composer Oscar Sweeney who writes a score comprising both acoustic and digital music for the work.

‘Especially in young people’ Brown shares, ‘There is a real sense of upheaval and hopelessness. I wanted to paint a picture of the resilience we have had to build and the spirit we have had to foster these past few years. There is this joy and humour that young people have used to get through Covid. Now we can get up and do something and feel excited about it’

Perhaps significantly, Bouman and Sweeney, are friends of Brown’s from university and high school respectively. For these young artists, there is a sensitivity to seeing people in space together that Covid lockdowns have created. As an artist, Brown is interested in improvisation, site-specific work and, above all, the humanity in dance, an art form which is innate to the human experience. Building on her previous work A Small Spectacle which explored the impact of digital technology on performance during Covid and also more generally, Waiting Game also comes from ideas in a pre-covid world.

‘If you put two humans in the space together, it creates an instant recognizable camaraderie or community and an opportunity for the audience to build stories’ Brown explains.

The two dancers in the rehearsal space crawl like a unified caterpillar, the weight of one bearing down on the other with movements rippling through from one end of the two-person living thing. The figures rise and reach out. A wave passes through them before the bodies lose their grip on one another and fall. There is silence now. But the Samba song and the sideways step linger in the back of my mind. Together, one woman cradling the other’s cheek, they swoop down and across the room. The woman cradles both cheeks now and the other woman places her hands on top forming a dramatic gesture reminiscent of Edvard Munch’s The Scream. Like a puppet and its puppeteer, one seems to determine the other’s movement and direction. At a climactic point, the puppeteer lifts her puppet up from the floor with her neck and shoulders, her puppet hanging upside down before collapsing to the floor once more. The work ends in the same way it began – humans stroking and touching their faces but this time, with more purpose.

Emerging dancer-choreographer Brown is no longer waiting in lockdown or elsewhere. She is here and I can’t wait to be there with her too.

Waiting Game is being presented on Friday March 25,Saturday 26 and Sunday 27 at Duti Studios Newtown as part of March Dance. You can support the self-funded work by donating to Phaedra Brown’s Australian Cultural Fund here: https://artists.australianculturalfund.org.au/s/project/a2E9q0000003B4bEAE/waiting-game