The Australian producers of SIX, the Tony Award winning electrifying musical phenomenon by Toby Marlow and Lucy Moss, are thrilled to announce Sydney audiences have another chance to experience the pop musical phenomenon SIX as it’s never been seen before with enhanced theatrical design. SIX returns to play a limited 5-week season at Theatre Royal Sydney commencing on August 26.

This Australian production played a record breaking 15-week run at Sydney Opera House during the summer where it become the longest running show EVER at the iconic venue! SIX has further enjoyed imperial reigns with rapturous acclaim by both critics and audiences in Canberra, Adelaide and currently in Melbourne.

The royal return to Sydney gives audiences one more chance to don their crown and experience this witty, pop-fueled musical packed full of sass. SIX remixes the history of the six wives of Henry VIII – Britain’s notorious Tudor King – as they take to the microphone to re-tell their stories and reclaim their HERstories, once and for all. Catherine of Aragon, Anne Boleyn, Jane Seymour, Anna of Cleves, Katherine Howard and Catherine Parr.

The incredible Queens reigning supreme on stage include Phoenix Jackson Mendoza playing the first wife, the sassy Catherine of Aragon. The rule-breaking second wife Anne Boleyn is played by Kala Gare. Loren Hunter in the role of the loyal third wife Jane Seymour. The independent Anna of Cleves is played by Kiana Daniele. Chelsea Dawson takes on the role of the playful fifth wife, Katherine Howard and Vidya Makan plays the surviving wife, the empowering Catherine Parr.

Since its early days as a student production in a 100-seat room at Sweet Venue during the 2017 Edinburgh Fringe Festival, SIX has continued its reign and become a global phenomenon. Its Studio Album has achieved in excess of 500 million streams across all platforms worldwide, over 3 billion views on TikTok and has recently reached Gold status. In May 2022, a live recording, captured from the star-studded opening night performance on Broadway was released, which topped iTunes charts the world over, and has already amassed over 10 million streams.

Recently SIX victoriously recommenced on the West End, across the UK and on Broadway it won 2 Tony Awards – to Toby Marlow and Lucy Moss for Best Original Score and to Gabriella Slade for Best Costume Design, 4 Drama Desk Awards and 3 Outer Critics Circle Awards including Outstanding New Musical. SIX was nominated for five Olivier Awards including Best New Musical and won the 2022 WhatsonStage Award for Best West End Show, voted for by the public. Most recently the London cast performed live in front of the Royal Family as part of Queen Elizabeth II’s televised ‘Party at the Palace’ celebrations in honour of the Platinum Jubilee, watched by a UK audience of over 13 million. The original West End cast also performed live from Hampton Court Palace at three sold-out performances to a combined audience of over 9,000 fans. 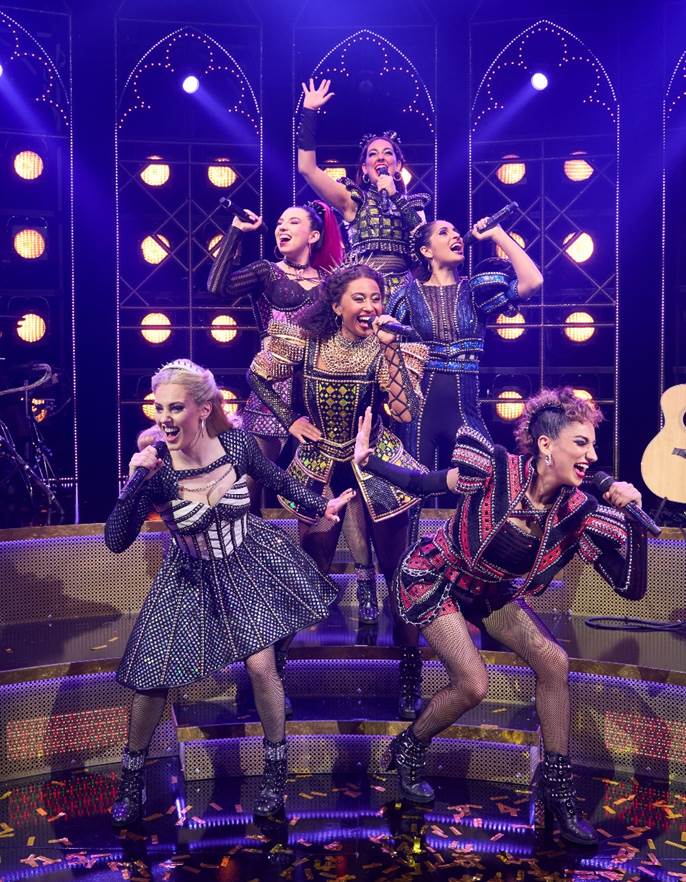 SIX The Musical has book, lyrics and music by Toby Marlow and Lucy Moss. It is directed by Lucy Moss and Jamie Armitage and choregraphed by Carrie-Anne Ingrouille. Set Design is by Emma Bailey, Costume Design is by Gabriella Slade, Lighting Design is by Tim Deiling and Sound Design is by Paul Gatehouse. The Orchestrator is Tom Curran and Musical Supervisor is Joe Beighton.