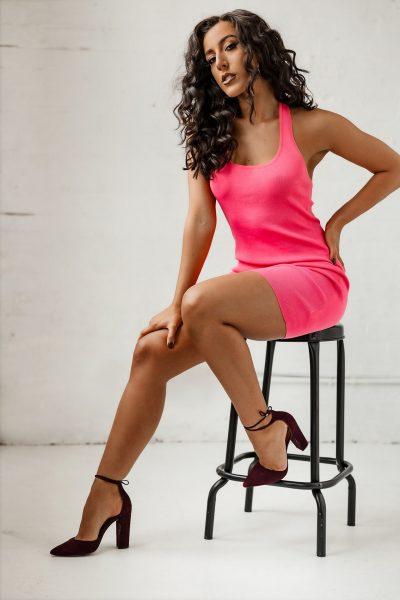 They say dancers don’t need wings to fly, but anyone in the biz knows that in order to become nationally or internationally regarded, and continue to gain prestigious roles, you actually need more than wings, you need talent, passion and determination and a work ethic like no other.

Since leaving her small country town home, Gulgong, in the NSW Central West at the age of 15 to study dance at the renowned Brent Street Studio in Sydney, Georgie Fabien has dedicated her whole life to dance. And now after years of hard work, dedication and giving to the world of performing arts, Georgie is being rewarded with dancing roles on prestigious projects such as The Masked Singer and The Voice where her talent for all styles of dance and choreography is showcased across the country to millions of viewers. Additionally, Georgie has graced many stages and screens with her undeniable talent, having danced in live performances and music videos for the likes of Vanessa Amorosi, Macy Gray, Vinnie Jones, Kota Banks and Nic Cester from the iconic rock band Jet, as well as dancing in many different stage productions, TV shows and advertisements such as Amazon Prime series’ “Miss Multiverse Australia”. Georgie was also finalist in the worldwide Australian Dance Film Festival, wherein she choreographed, directed, and starred alongside one of Australia’s most sought-after performers Coby Njoroge, earning her place in the top 2 films of the festival, making her movie theatre debut at Hoyts Cinema in the Entertainment Quarter.

“Ever since I was a little girl, I wanted to dance, and like so many other young dancers, I took up ballet and jazz at a local dance school. It was clear to me even then that dancing was in my blood, and I knew I wanted to be a professional dancer when I grew up”

“For me, I think I love that dance can be many different things to people, both an creative outlet and a cultural celebration, but I also see it as a very competitive sport that requires supreme fitness and dedication.”

“The professional dance world today is super demanding. In addition to constantly training, teaching, and competing for roles, you have to manage the exhaustion of the daily physicality of dance and the constant hustle of building your presence in the industry, but it also delivers so many amazing opportunities and is definitely the career for me.”

“Dancing has delivered many memorable moments for me, but one of the most recent was during my season with The Masked Singer, Australia. You see, I have always been a huge Anastasia fan, and my mum has video footage of me dancing to her when I was only 4-years-old pre dance lessons. So, you can imagine my face when I was on stage alongside her. Of course, nothing was confirmed until she was unveiled in the final episode. I was so honoured to have shared the stage with such an icon” added Georgie.

“Growing up in Gulgong definitely taught me about how important having a good work ethic is and to succeed, you have to work very hard and sometimes overcome unexpected challenges” Georgie said.

Having achieved a great deal in Australia, Georgie now has a burning desire to take on the international market and is keen to call LA home whilst she secures her footing in the US.

“Although I love Australia, and it will always be home, LA is basically the epicenter of dreamers. It’s where all the crazy people with ridiculously large goals and ambitions who want to be the best converge. The opportunities there are insane!’’

If talent, hard work and dedication can make your dreams come true, then we know that as Georgie spreads her wings and heads to LA that we will be seeing her on stages, screens, and productions across the world in the very near future.

Previous Post Jekyll and Hyde The Musical to be Unleashed a...

Next Post L E A P Opens This Week for East Coast Tour!