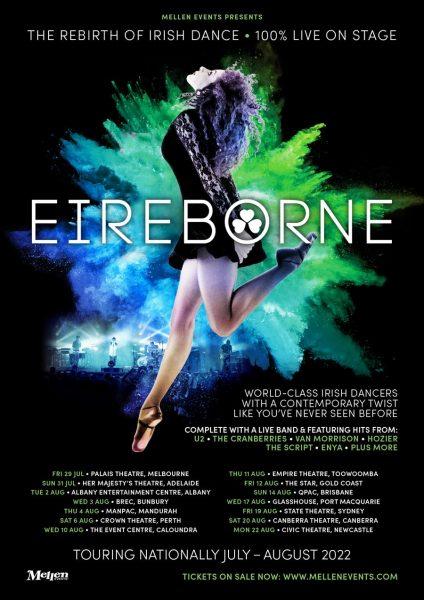 Eireborne is an epic display of the Irish spirit through a unique fusion of 100% live rock music and Irish dance and tap.  The spectacular show boasts one of the most impressive Irish dance casts ever assembled in Australia, brought to life with a live six-piece band. Coming off a wildly successful run of sold-out shows across Australia and Europe in 2019, the production has endured three COVID-related delays, to finally bring it back down under where it all began.

The long-awaited Eireborne show has fueled the public’s anticipation as they embark on a 26-day, 19-show run stretching from Melbourne in the south, across to Perth in the west, the Sunshine Coast in the north, and many cities and regional towns in between.  Some venues across the country are almost sold out so quick ticket purchasing is highly recommended. Ticket sales (www.mellenevents.com).

Eireborne’s all-Australian 20 cast members are incredible stars in their own right. Among them is 19-year-old Liam Costello, the young Aussie who continues to beat the Irish at their own game being recently crowned winner of the Irish Dance World Championship in April 2022. When he’s not rehearsing or travelling the globe performing and competing, Liam works in his family’s plumbing supplies shop in suburban Sydney. He started pursuing his lifelong obsession with dance at the tender age of five. Liam now holds the record of being the first Australian to win the title of world champion three times consecutively. After earning an absolute treasure trove of trophies from around the globe, the prodigious Australian dancer now rubs shoulders with the best of the best.

Eireborne’s cast boasts 11 of our top Irish Dancers, including lead dancer/creator/choreographer/co-producer and multi-award-winning 34-year-old Peta Anderson. The internationally revered dancer stated that she was driven “to push the boundaries” with this production, which includes recruiting one of the ballroom dancers from Dancing With The Stars and featuring choreography that’s never been seen before. Peta says Eireborne is set to “revolutionise Irish dance, which shows just how versatile and mesmerising Irish dance can be, including 11 costume changes throughout the show!  It’s going to be a dazzling spectacular.”

Adding to the list of elite performers on stage will be a six-piece band featuring two virtuoso singers boasting illustrious careers including ARIA nominated hitmaker Reigan Derry, who has hit songs with 26+ million Spotify streams and four national #1 songs last year. Joining Reigan on lead vocals is Pete Murphy, the booming voice behind Jesus in Jesus Christ Superstar, and Australian and international productions such as Les Misérables, Rent, and Shout! The two voices immerse the audience with nearly two hours of anthems from Irish artists such as U2, The Cranberries, Van Morrison, Hozier, The Script, Enya, and more.

Eireborne takes the audience on a rare journey through the great Irish lineage of the art form that has come out of Ireland’s small, yet mighty nation. Audiences will enjoy a state-of-the-art lighting display throughout the production, promising a stunning visual display.

Expect a fusion of rhythm, melody, and theatrics like you’ve never seen before. Eireborne is dazzling and unmissable.