Be Your Self Redux

After the Melbourne season of the full production of Be Your Self, Australian Dance Theatre will take a scaled down version of the show on the road.
Created and directed by Artistic Director Garry Stewart, Be Your Self reveals the instability of the concept of ‘self’ and notion of ‘I’. In the analysis of selfhood, Stewart situates the body at the centre of his enquiry. Dancers are transformed into erupting. Powerful, creative entities projecting physical images and impressions set to an unpredictable and cartoonish score.
In the distilled version of the full work, which will tour, ADT dancers are transformed into erupting, powerful entities. Fusing Stewart’s audacious choreography with spoken word, Be Your Self Redux is a visually exciting dance work leaving audiences questioning the underpinnings of who they are. 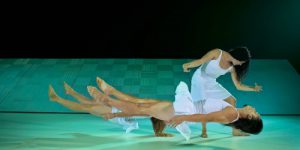 ADT | BE YOUR SELF

ADT | BE YOUR SELF REDUX