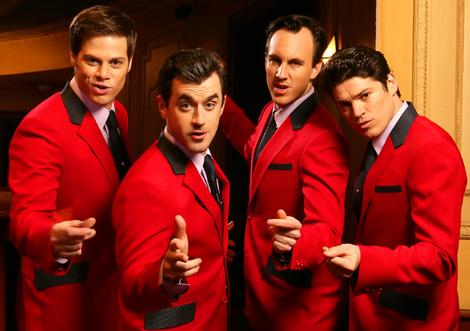 JERSEY BOYS – The Story of Frankie Valli & The Four Seasons, which opened September, 2010 at Sydney’s Theatre Royal will be one of the longest running musicals in the history of the venue, breaking the Theatre Royal’s weekly Box Office records as the highest grossing in the theatre’s history.
Since opening in Melbourne in July 2009 over one million people have seen this Broadway hit in both Melbourne and Sydney. The Sydney season will close on Sunday 18 December 2011 with JERSEY BOYS heading to New Zealand, opening in April 2012 at The Civic, Auckland.
“We are thrilled with the success of JERSEY BOYS in Sydney which clearly demonstrates the unique relationship between theatre and tourism in Sydney.  Our collaboration with Destination NSW and our many partnerships have resulted in 15% of our audiences coming from interstate and international markets creating a substantial boost to the NSW economy.”
– Rodney Rigby, newtheatricals
“It is with heartfelt gratitude that all of us in the JERSEY BOYS family would like to thank the city and people of Sydney for embracing our show.  Though New Jersey is far from Sydney, the nightly standing ovations and the cheers from fans have made us feel right at home.  We will remember your enthusiastic audiences and Aussie hospitality long after the final curtain on 18 December.”
– Michael David, Dodger Theatricals

“There is no doubt Sydneysiders and a significant number of interstate and overseas visitors have embraced the Sydney production of JERSEY BOYS.  The production has smashed weekly box office records as the highest grossing show in the Theatre Royal’s history and has been a tremendous addition to the NSW Events Calendar.”

“The NSW Government through Destination NSW has been working hard with musical theatre producers to position Sydney as the number one city for musicals in Australia and next year we look forward to the Sydney season of Rock of Ages and in 2013 the Australian premiere of the Broadway smash hit musical The Addams Family.”
– George Souris MP, NSW Minister for Tourism, Major Events and the Arts

JERSEY BOYS – The Story of Frankie Valli & The Four Seasons, is the story of how four blue collar boys from the wrong side of the tracks became one of the biggest American pop sensations of all time.  Frankie Valli, Bob Gaudio, Tommy DeVito and Nick Massi joined forces to become The Four Seasons, writing their own hits and developing their unique sound to sell over 175 million records before they were 30!
JERSEY BOYS features twenty Four Seasons hit songs including “Sherry”, “Big Girls Don’t Cry”, “Rag Doll”, “Oh What a Night” and “Can’t Take My Eyes Off You”.
www.jerseyboysaustralia.com.au

Previous Post Marketing the Business of YOU By Alexandra Ch...