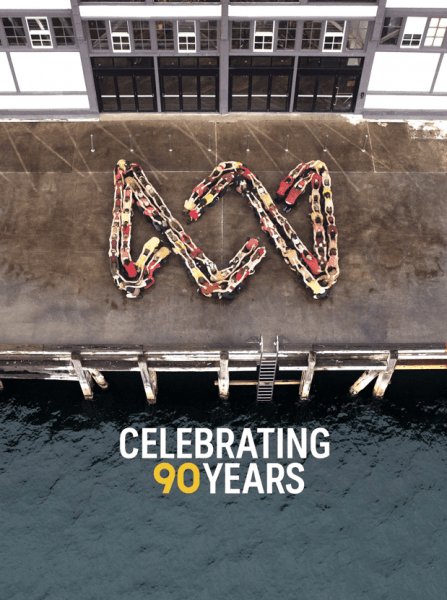 Sydney Dance Company and the ABC

Sydney Dance Company is thrilled to announce a special collaboration with the ABC, as the national broadcaster today launches a new brand campaign to celebrate the milestone of 90 years of broadcasting in 2022.

Focused on connecting Australians, the ABC has created several creative content pieces that showcase and highlight different communities that the ABC engages with across its services.

Filmed in four different locations across the country, ninety people come together in each location to perform the iconic song by Bruce Woodley AO and Dobe Newton, I am Australian, and in each scenario, create the ABC Lissajous logo in a variety of ways.

Showcasing some of the incredible performers and community groups across Australia, four hundred individuals feature at the heart of the ABC campaign.

One of the four creative content features Sydney Dance Company. Through Rafael Bonachela‘s choreography, ninety dancers from Sydney Dance Company’s ensemble, Studio Classes, Pre-Professional Year and diverse community tell the story of the ABC’s evolution, culminating in the creation of the ABC logo in a stunning physical form. This piece of the brand campaign was filmed at Sydney Dance Company’s iconic Wharf Studios at the Walsh Bay Arts Precinct on Sydney Harbour.

In addition to Sydney Dance Company, ABC collaborated with ninety choir singers, including members of the Central Australian Aboriginal Women’s Choir perform on Arrernte Country singing a stirring rendition of the song in Pitjantjatjara language.

An energetic rendition of the song is performed by ninety drummers on a Brisbane rooftop overlooking the city and a choir of ninety school children from Sydney perform a version which includes signing in Auslan.

ABC’s musical partners, Uncanny Valley, worked closely with one of the original composers, Bruce Woodley AO, to re-arrange the track in four different ways. The work was created by the award winning creative team, ABC MADE.

Rafael Bonachela, Artistic Director of Sydney Dance Company said; “To be involved in ABC’s historic 90th birthday brand campaign has been a huge honor. I wanted my choreography for this video to convey happiness, unity and celebration and reflect our diverse dance community coming together for this very special milestone for our national broadcaster. The ABC has always provided an invaluable platform for the Arts in Australia, and to be a part of this unique moment in time, captured at Sydney Dance Company’s iconic Wharf Studios on Sydney Harbour is incredible.”

Diana Costantini, Head of Creative/ Creative Director ABC MADE said; “There was an enormous amount of energy and passion for this project. At its heart, the campaign is about capturing people doing what they love to do and that is – connecting with each other. We were there to share that and bring that joy to the screens.”