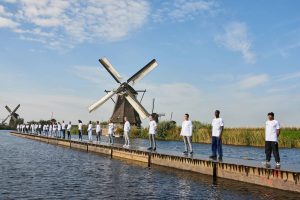 On September 29 2017, over 70 breakdancers set a world record for the most simultaneous windmill moves completed in 30 seconds. The event was sponsored by Red Bull in lead up to the world final of the BC One global breakdance competition in Amsterdam on November 4.
The Dutch breaking scene gathered to celebrate their passion and set the world record for the most windmills – the most recognisable move in breaking – completed simultaneously by the largest group of dancers aged between 15 and 50 years old. 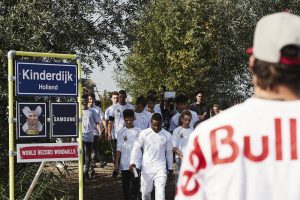 The windmill is a popular Hip Hop dance move where the legs are lifted high in the air and twisted in a windmill pattern, while the torso and the head stay against the floor.  The world record was set at Kinderdijk, a village in the Netherlands’ South Holland province, known for its iconic 18th-century windmills. Always pushing the limits of the human body, breakers constantly awe the crowds with their skills, innovation and combinations.
“It was amazing to share this record with the scene in Holland. I’m convinced that the Red Bull BC One World Final in Amsterdam will be a huge success. I’m looking forward to watching the great talent there” said Red Bull BC One All Star B-Boy Cico who witnessed the record breaking event.


One of the most recognised names on the Dutch breaking scene present today, Niek Traa said, “The windmill is a classic breaking move and has a funny connection with the Netherlands. That is how we came up with the idea for this world record. The breaking scene in the Netherlands is growing fast and we are very proud of that. After New York, Tokyo and Rome, we feel honoured to host this year’s Red Bull BC One World Final and are looking forward to it. Obviously, the breakers are each other’s rivals during the battles, but today we wanted to show our shared love for breaking.”


RED BULL BC ONE WORLD FINAL

On November 4, the best 16 breakers on the planet will battle in a one-on-one knockout competition at Amsterdam’s Westergasfabriek. Some of the most groundbreaking dancing is expected to be seen to identify the ONE B-Boy/B-Girl who can claim the esteemed title of Red Bull BC One World Champion.
Red Bull BC One is a global celebration of Hip Hop, combining dance, music, style and art followed by millions on TV and online. Since its inception in 2004, it has become the premier competition in the world of break dancing, consistently attracting the best individual breakers on the planet. Since the first event in Switzerland, the annual competition has moved from Germany to Brazil, South Africa, France, USA, Russia, South Korea, Italy, and Japan.

Watch it live! The Grand Final event on November 4 is sold out, but you can watch it LIVE on Red Bull TV and www.redbullbcone.com.