Anything Goes Arrives in Australian Cinemas for Two Days Only 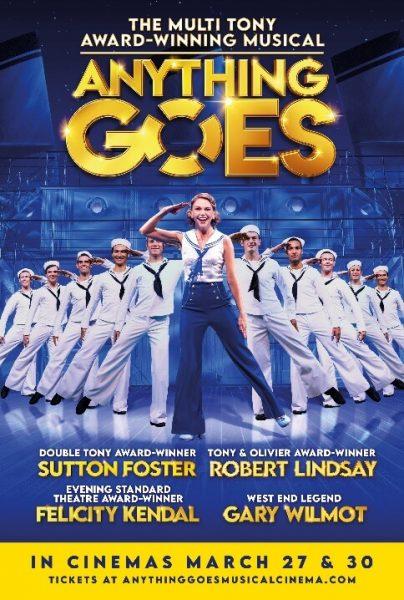 The smash hit musical ANYTHING GOES, starring Tony Award winner Sutton Foster and directed and choreographed by Tony Award winner Kathleen Marshall will sail onto Australian cinema screens for two days only on Sunday March 27 and Wednesday March 30 in a live recording filmed at London’s renowned Barbican Theatre. Tickets are on sale now at anythinggoesmusicalcinema.com

This 5 star hit stage production received rave reviews from audiences and the UK media, describing it as ‘the show of the year’ (★★★★★ Daily Telegraph),  ‘a joyously shipshape revival’ (★★★★★ The Observer), a ‘fizzing tonic for our times’ (★★★★★ The Guardian) and declaring it ‘immediately joins the pantheon of great classic musical revivals’ (Daily Telegraph).

Sutton Foster says: “I was thrilled to have been able to revisit Reno while performing Anything Goes in London in the fall with an amazing new cast, crew, and orchestra. Now I’m thrilled that I can share her and this joyous musical more widely with audiences at theaters in Australia this March, especially at a time when I am so grateful to be back performing on a Broadway stage. I am so proud to have been part of a production which delivers joy and laughter to audiences in the way Anything Goes does and I am so delighted that we are able to share that with Australian audiences in this way.”

Producer Howard Panter says: “The multi-Tony Award winning glorious production of Anything Goes, directed by Kathleen Marshall, is not to be missed. The UK cinema success demonstrated a real appetite for musicals on the big screen. From outstanding leading actors to the spectacular supporting company, the glorious set design, the breathtaking choreography and stage direction, and of course the wonderful score – it really is ‘the show of the year’. I am thrilled that the show can be enjoyed by an even wider audience with this special two-day Australian cinema release.”

Trafalgar Releasing’s CEO Marc Allenby says: “We’re delighted to be working with our partners within the Trafalgar Entertainment Group to bring this entertaining and uplifting five-star musical to Australian cinemas. Musical theatre has a proven track record of box office success on the big screen, and with its all-star cast, spectacular dance routines and instantly recognisable songs, Anything Goes is the perfect production to bring laughter and joy to cinema audiences.”

Director and choreographer Kathleen Marshall says “I am so thrilled that the film of our West End production of Anything Goes is coming to Australia this spring! I’m so excited to share with movie audiences this wonderful musical comedy featuring our stellar cast, amazing orchestra and incredible creative team. We hope cinema audiences will join us for this delightful and romantic crossing!”

Featuring a 50 strong cast and ensemble of the finest there is to offer on the London stage, this stunning production includes tap dancing sailors, a full-sized live orchestra, a heart-warming romance with spectacular dance routines and some of theatre’s most memorable songs.

ANYTHING GOES has music and lyrics by Cole Porter, an original book by P.G. Wodehouse & Guy Bolton with Howard Lindsay & Russel Crouse and a new book by Timothy Crouse and John Weidman.  The musical also stars Samuel Edwards (Les Misérables / Wicked) as Billy Crocker, Nicole-Lily Baisden (The Book of Mormon / Let’s Face The Music) as Hope Harcourt, Haydn Oakley (A Christmas Carol / An American in Paris) as Lord Evelyn Oakleigh and Carly Mercedes Dyer (West Side Story/Chicago) as Erma.

When the S.S. American heads out to sea, etiquette and convention head out the portholes as two unlikely pairs set off on the course to true love… proving that sometimes destiny needs a little help from a crew of singing sailors, a comical disguise and some good old-fashioned blackmail. This hilarious musical romp across the Atlantic, directed by the multi-award-winning Broadway director and choreographer Kathleen Marshall, features Cole Porter’s joyful score, including I Get A Kick Out of You, You’re the Top and the show stopping Anything Goes.

ANYTHING GOES was released in UK cinemas in November to the delight of musical theatre fans nationwide. The release achieved instant box office success as the highest grossing Event Cinema release in the theatre space for 2021.  ANYTHING GOES will be showcased in cinemas around the world on March 27 and 30.

All aboard!  ANYTHING GOES will take you back to the Golden Age of high society on the seas from the comfort of your cinema seat.

This film is produced by special arrangement with Universal Theatrical Group.

‘Makes you gasp in wonder and laugh till it hurts. Pure class.’

‘The show of the year. I would give it six stars if I could’

’The musical equivalent of sipping one glass of champagne after another’

‘When a musical packs this much energy and spectacle, nothing else goes!’

’Bubbly wit and stylish fun. It shimmers and sparkles.’

Next Post Anna O'Byrne in Becoming Eliza at the Sydney ...