Premiering at the 2020 Adelaide Fringe Festival, Retrieve Your Jeans is a quirky new contemporary dance show by Cayleigh Davies and Rita Bush. The festival program blurb for the show describes it as “five women, a washing line and endless blue jeans. A quirky and soulful dance performance traversing seemingly insignificant moments in time … shaping us and the connections we weave through our journey in life.” 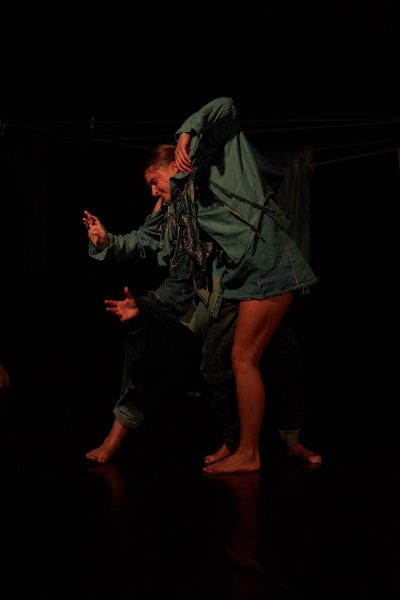 The performance began with a natural soundscape and dim lighting. The movement to begin with was very slow and sustained as the dancers morphed into a tableau reminiscent of Darwin’s Theory Of Evolution. Although the movement was slow and sustained, like the process of evolution itself, audience members with a short attention span may have drifted.

The performance had a variety of solos, duets and group motifs. The duets seemed to signify the importance of one-on-one relationships. Where as, the group work reinforced the idea of peer relationships and the sense of feeling left out at different moments in life. After each motif, denim was placed in the shape of a dancer on the floor to create a physical map that signified where the dancer had been in life. A memorable solo was when the rest of the cast continuously threw clothes at the soloist. This physical act indicated metaphorically, that the dancer was trying to dodge what life was throwing at her. An element of comedy was also integrated when the same dancer then tried to pick up all of the denim scattered across the floor. This act illustrated the dancer picking up the pieces of her life and then feeling smothered by life’s challenges as she clutched onto a huge pile of denim. Although this section was comical, it may have been too prolonged.

The comedy continued when the dancers began sorting out the denim and putting the pieces into different piles whilst erratically dancing to funky music. The compartmentalising of clothes and erratic dancing was reminiscent of cleaning out your closet and getting distracted by the belongings you find inside. As the dancers retreated to their piles, one performer continued dancing eccentrically. Following this, another dancer held her clothing bundle over the soloists head, like an ominous black cloud. The denim then dropped onto to her, figuratively raining on her parade and stopping her movement. To my surprise a denim monster then appeared creeping onto the stage. This sinister character then became light-hearted when it performed a theatrical tap number to Blue Jeans by Skyhooks.

According to the Adelaide Fringe Festival guide the duration of the performance was 45 minutes however; the performance lasted for just over 30 minutes, which left the audience wanting more!

The creators Rita Bush and Cayleigh Davies are evidently a successful collaboration, and together can produce truly innovative and unique dance works. They are a pair to watch in the future.

(Please note that contemporary dance is open to interpretation and how the work was perceived may not have been how it was originally intended.)