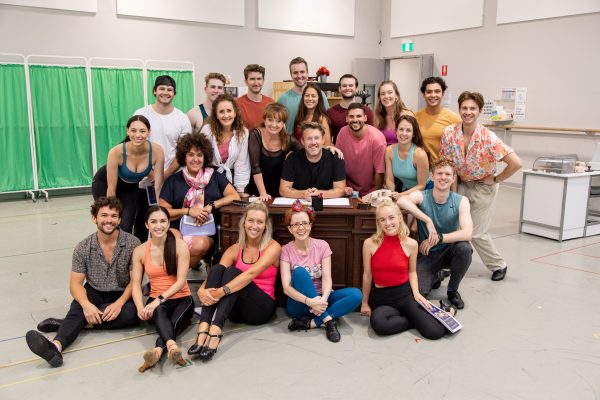 Rehearsals have begun and the countdown is on to the much anticipated Australian premiere of 9 TO 5 THE MUSICAL. Dolly Parton’s smash-hit West End musical will open on 16 February at the Capitol Theatre, Sydney, followed by a limited season at the Lyric Theatre, QPAC, Brisbane from 22 May. Internationally acclaimed and loved by audiences and critics alike, 9 TO 5 is pure gold carat fun!

The producers have assembled a top line cast to inhabit these iconic and much loved roles. Marina Prior will play Violet Newstead, a smart, sassy and efficient woman who has worked all her life at Consolidated Industries. She has all it takes to run the company but there is one small issue … her boss! Casey Donovan will be Judy Bernly, a newly separated, never worked before young woman who finds more than just a job at Consolidated Industries. Erin Clare plays Doralee Rhodes, a ‘don’t mess with me’ well-brought-up, bright and beautiful country gal. She may look like a push over but is anything but! Caroline O’Connor will be busy-body Roz Keith, the administration assistant who is fiercely – and unrequitedly – in love with her boss, while Eddie Perfect will play the controlling boss Franklin Hart Jnr.

“I am so excited that Marina, Casey and Erin will be playing Violet, Judy and Doralee alongside Caroline and Eddie in the Australian cast of 9 TO 5,” said Dolly Parton. “The response to 9 TO 5 from around the world has been incredible so far. I can’t wait for everyone down under to have a fun (and funny!) night out at 9 TO 5.”

Producers John Frost for Crossroads Live Australia, Suzanne Jones and Ambassador Theatre Group Productions said, “We’re thrilled with our hugely talented cast, led by Marina, Casey, Erin, Caroline and Eddie. 9 TO 5 is back in business with the glorious sounds of rehearsals in full swing, the orchestra practicing the score, technicians getting the set ready to be bumped into the theatre, and the box office selling tickets to excited audiences. Forget the Covid blues and join us for 9 TO 5. It will be the most fun you’ll have all year!”

The Australian premiere, secured exclusively for Sydney by the NSW Government through Destination NSW, will be a major drawcard for visitors to NSW.

Minister for Tourism Stuart Ayres said, “I am delighted rehearsals have commenced for 9 TO 5 and this acclaimed production is a step closer to making its Australian premiere at the Capitol Theatre right in the heart of Sydney’s CBD. Bringing productions like 9 TO 5 to Sydney tells the world the Harbour City is open for business and welcoming visitors to enjoy our city’s vast cultural offerings and hospitality. The NSW Government is committed to investing in world-class productions like 9 TO 5 to deliver on our goal of becoming the premier visitor economy in the Asia Pacific.”