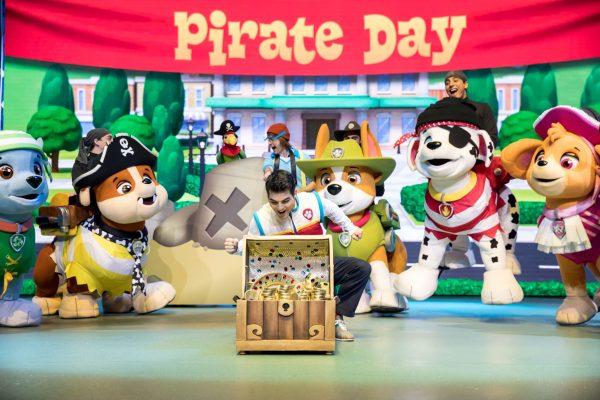 The PAW Patrol® pups set sail on their 20-show tour of PAW Patrol Live! “The Great Pirate Adventure” Presented by Paramount+ this weekend in Perth, before making their way to Sydney Harbour and continuing around the country this April-May!

For young fans, PAW Patrol Live! stage shows are the perfect introduction to live theatre. Audiences are encouraged to dance and sing along, while the live show shares lessons for all ages about citizenship, social skills and problem-solving as the characters each use their unique skills and teamwork.

TEG Life Like Touring has advised there are now only a handful of the highly sought after VIP packages available across all markets. The VIP package tickets include a souvenir Postergram (Poster/Program) plus a post-show Meet & Greet with two of the pups!

In PAW Patrol Live! “The Great Pirate Adventure” Presented by Paramount+, Mayor Goodway is getting everything ship-shape for a big Pirate Day celebration in Adventure Bay. When Cap’n Turbot falls into a dark and mysterious cavern, it’s PAW Patrol to the rescue! Chase, Marshall, Rubble, Skye, Rocky and Zuma save Cap’n Turbot and discover a secret pirate treasure map that leads them on an epic adventure. Over land and on the high seas, the pups set out to find the treasure for Mayor Goodway so the celebration can go on. Things get ruff when Mayor Humdinger wants to find the treasure first for Foggy Bottom. The pups need all paws on deck for this pirate adventure, including help from the newest pup who’s all ears…Tracker! Using their heroic rescue skills, problem solving and teamwork, the pups set sail to save the day. No job is too big, no pirate pup is too small!