On by Circa – World Premiere 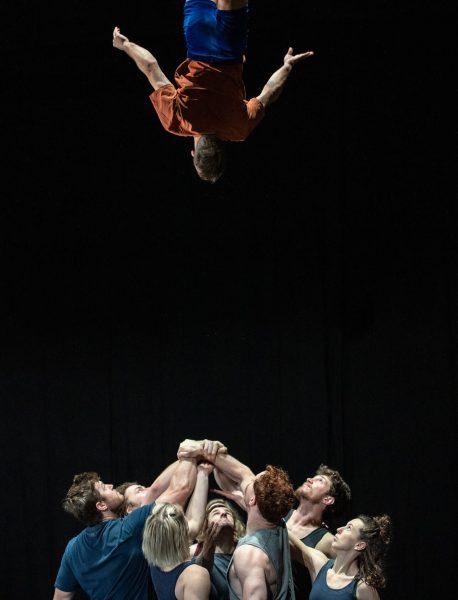 On by Circa – Monash University

Circus at Its Contemporary Best – As Thrilling As It Is Moving

Monash Performing Arts Centres is delighted to present the World Premiere of On by Circa.

Over the past two decades, Circa has forged a reputation as the most artistically audacious circus on the planet. With productions ranging from large scale operas and vast choreographic spectacles through to site specific adventures and intimate chamber works, the breadth of its vision is unparalleled.

For the Company’s new show, Artistic Director Yaron Lifschitz explores the gift of weight that lies at the heart of acrobatics. The simple act of giving and accepting another’s mass is transformed into a profound meditation about beauty, loss and trust.

To achieve this alchemy, the stage elements are reduced to their most essential: seven extraordinary acrobats, a score by Melbourne composer Jethro Woodward and a striking lighting design. Layering complex acrobatic sequences with sharp moments of close-up intimacy, the ensemble creates a stripped back circus of the heart that’s uncompromisingly bold and unashamedly athletic.

Artistic Director Yaron Lifschitz  said: “The axis of encounter is integral to this new work. After two years of distancing, On by Circa explores physical connection, relationships and touch. Rather than complex architecture, it is a performance stripped back to our most essential ingredients – bodies, light and sound in the service of ideas that create powerful emotions. Infused with a fierce humanity and exceptional circus skills, On by Circa is about encountering risk knowing that you will be caught, held and lifted.”

Executive Director of Monash University Performing Arts Centres, Paul Grabowsky said:  “I am delighted to be hosting the world premiere of On by Circa. Our team have worked closely with Circa over several years to realise the birth of this exciting new production by one of the world’s foremost physical theatre companies, and its visionary director. Now, as we emerge from restrictions of the last two years, borne equally by universities and the performing arts, it is exciting to announce the return of Monash University to the forefront of new Australian performance with this important achievement. “

About Circa
Circa Contemporary Circus is one of the world’s leading performance companies. Since 2004, from its base in Brisbane, Australia, Circa has pioneered a daring new vision of contemporary circus that combines extreme physicality, music, theatre and acrobatics into a mesmerising spectacle of movement and expression. The company have performed at the world’s leading venues and festivals, with seasons at places like the Brooklyn Academy of Music (BAM) and London’s Barbican Centre as well as major Australian festivals – thrilling over 1.5 million people in 40 countries to date. Their works have been greeted with standing ovations, rave reviews and sold-out houses across six continents, leading their majestic productions to be hailed as a “masterpiece of circus arts” (La Presse, Montreal), “astonishing physical mastery” (New York Times), and “a revolution in the spectacle of circus” (Les Echos, France). In 2021 Circa was the first Australian major performing arts company to be touring internationally and earlier this year performed in the US for the first time in two years.