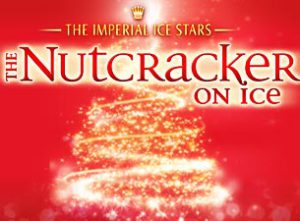 The international ice dance sensation The Imperial Ice Stars make a triumphant return to Australia next winter with a dazzling new production of The Nutcracker on Ice.
WIN TICKETS TO SYDNEY 6 JUNE HERE
Over the last seven years, The Imperial Ice Stars have performed to more than three million people across five continents, at some of the world’s most prestigious venues – London’s Royal Albert Hall and Sadler’s Wells, Singapore’s Esplanade Theatre, Montreal’s Place des Arts and Moscow’s Red Square.
This award-winning troupe has built up a worldwide following and established an unrivalled reputation for their sophisticated portrayals of classic works, and for executing the most complex and daring manoeuvres on the ice. Their previous world tours (Sleeping Beauty on Ice, Swan Lake on Ice and Cinderella on Ice) have been greeted with nightly standing ovations and five-star reviews.
For their latest production, The Nutcracker on Ice, acclaimed Artistic Director Tony Mercer – the world’s leading creator of contemporary theatre-on-ice – has once again teamed with four-time figure skating World Champion and dual Olympic gold medallist Evgeny Platov, and dual World Champion Maxim Staviski to create choreography that further raises the bar, with ever more breathtaking high-speed leaps and throws, and awe-inspiring acrobatics, coupled with the most graceful and sublime ice dancing.
“The Imperial Ice Stars give skating a stamp of class – the cast is simply superb.” The Daily Telegraph, Sydney (Swan Lake on Ice)
To Tchaikovsky’s memorable score, the 25-strong cast of World, European and National Championship skaters will astound and mesmerise audiences with their adrenaline-rich, dramatic performance, in the intimate setting of a frozen theatre stage.
Set in early 1900s St Petersburg, The Nutcracker on Ice boasts sumptuous sets by leading Australian scenic designer Eamon D’Arcy in this his fourth Imperial Ice Stars show, opulent and stylish costumes, and magical special effects.
This brand new production follows the classic Russian tale of Maria, the little girl whose love brings to life her cherished Nutcracker doll – a magical Christmas gift from her mysterious godfather – leading to adventures with the Mouse King, the enchanted Prince, and the Sugar Plum Fairy.
The story was originally penned nearly two centuries ago, in 1816, by the German author E T A Hoffman, and was later adapted by the French writer Alexandre Dumas in 1847. From this adaptation, the Russian composer PyotrIlyich Tchaikovsky and choreographer Lev Ivanov created their ballet, The Nutcracker, which was first performed in St Petersburg in 1892 and has since become a perennial Christmas favourite the world over.
“One of the most exhilarating entertainment spectacles you will ever witness.” The New Zealand Herald (Cinderella on Ice)
The Imperial Ice Stars’ Artistic Director, Tony Mercer, explains “The art form of ice dance lends itself beautifully to this well-loved tale. Not only does the story entail some beautiful romantic ‘adagios’ with lifts and jumps, but the exotic ‘divertissements’ from Spain, China, Arabia, Russia and Egypt allow us to introduce some gymnastics, flying, acrobatics and special effects.” The Nutcracker on Ice will thrill and enchant all ages.
“Takes ice ballet to another level… the stuff
dreams are made of.” Adelaide Sunday Mail (Cinderella on Ice)