Journey to a retro alien utopia where everything is not as it seems! 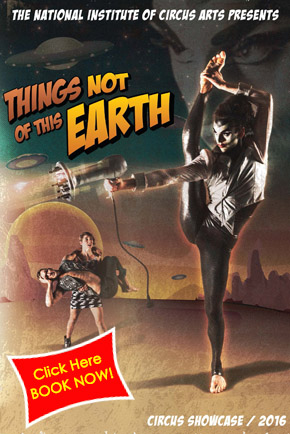 Things NOT of this EARTH is an exciting new production featuring the 2016 graduating class from the National Institute of Circus Arts in a retro sci-fi themed showcase.
Directed by renowned circus and theatre artist Hayden Spencer with associate direction from award-winning circus artist and NICA graduate Emma Serjeant, Things NOT of this EARTH incorporates elite-level circus skills in a satirical romp towards an extraterrestrial utopia.
Distinctive circus acts will be presented against the backdrop of a sci-fi inspired B-grade movie. The production will feature a diversity of other-worldly delights including a killer hermaphrodite from outer space, a giant foot-juggling strawberry and a soccer-ball-juggling alien.
Fourteen of NICA’s final year artists will present spectacular solo acts including aerial straps and rope, Chinese pole, contortion, handstands, hula hoop, juggling, rolla bolla, roue Cyr, tightwire and trapeze.
Audiences should prepare to be on the edge of their seats as part of this utopian space exploration, which invites them to wander off the beaten path and away from their comfort zone. You’ll have to ask yourself, “Who or what is really to be feared in this world?”

Hayden Spencer has performed as the lead clown in Cirque du Soleil: Dralion, acted in multiple shows for Melbourne Theatre Company, La Boite Theatre Company among many other companies. He is also an accomplished writer/director working with La Boîte Theatre, QPAC, NICA and Queensland Theatre Company. Emma Serjeant graduated from the National Institute of Circus Arts in 2006. She was then selected as an ensemble member of C!RCA and in late 2011 co-founded Casus Circus. During her four years as Executive Director of Casus Circus, Emma developed several new shows including her critically acclaimed solo, ‘Jerk’.
NICA is Australia’s Centre of Excellence for training in contemporary circus arts. It is one of eight national arts training institutes and offers Australia’s only Bachelor of Circus Arts. Graduates of NICA have gone on to pursue exciting careers both locally and internationally and have contributed to the development of Melbourne’s vibrant circus arts industry. The course is accredited by Swinburne University of Technology and attracts applicants from around the world.

Things NOT of this EARTH  | Circus Showcase 2016

Previous Post Hosts and Performers Announced for Helpmann A...