The actors playing the roles of one of the greatest stage and screen friendships of all time – Muriel and Rhonda – in the upcoming Melbourne and Sydney seasons of Muriel’s Wedding The Musical have been announced by production company Global Creatures. 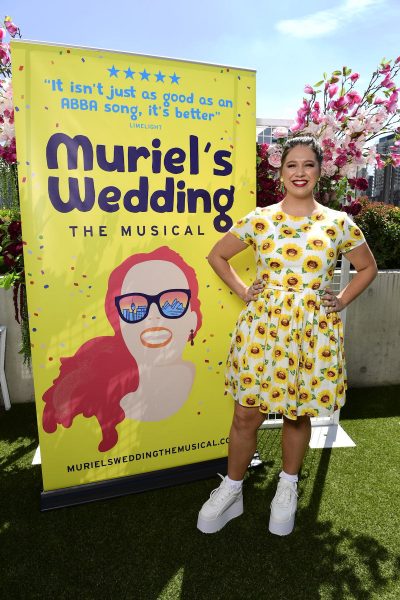 Taking on the iconic and much-loved lead role of Muriel Heslop, in her very first professional stage production, is Natalie Abbott. Hailing from the South Coast of NSW, 23 year old Natalie has been ‘singing since before she could talk’.  And much like Muriel, Natalie left her small coastal town and moved to the big smoke – Sydney, where she completed her Bachelor of Music degree in Musical Theatre at the Australian Institute of Music.

Of winning this coveted role Natalie said “I am overjoyed to be playing Muriel, if I try really, really hard I honestly cannot think of another character I relate to as much as her.  This is a dream come true, all my life all I have ever wanted to do was to perform in musicals and to be playing such an important role is going to be a challenge I cannot wait to commence.”

Stepping into the role of Muriel’s best friend Rhonda is young actor Elizabeth Esguerra.  A graduate of the Victorian College of the Arts and training at the National Institute of Dramatic Art, Elizabeth has performed in numerous stage productions, most recently lead roles in the Malthouse Theatre productions of Revolt. She said. Revolt again and Turbine. Elizabeth said “I am so excited to be embarking on this incredible adventure with Natalie, we have started rehearsing together and we already feel the chemistry, just like BFF’s. Rhonda is fearless and fun, she has an incredible journey throughout this story that I am looking forward to going on with her.”

Director Simon Phillips said “It’s so exciting to have discovered two such exceptional young women to play Muriel and Rhonda. These iconic characters represent all that is joyous about Muriel’s Wedding – outsiders who defy convention and popularity to conquer the world on their own terms – and with Natalie and Elizabeth I feel we’ve found the perfect pair to bring all that warmth, wickedness and ultimately moving drama to our story.”

Winner of 5 Helpmann Awards, 7 Sydney Theatre Awards and an Awgie Award, Muriel’s Wedding The Musical celebrated its’ world premiere in Sydney in November 2017 and was hailed a smash hit by critics and audiences alike:

“Incredible. It will be talked about for years.” – Sydney Morning Herald
“This is a show with heart” – The Guardian
“Has the biggest heart in the world…Will leave you smiling for days” – Time Out

Tickets on sale now from www.ticketmaster.com.au