New tickets for Dolly Parton’s smash-hit West End musical, 9 TO 5 THE MUSICAL, in Adelaide go on sale this week for performances up to 30 October at Adelaide Festival Centre’s Festival Theatre, with pre-sales from today and GP on-sale from Friday 29 July.

Internationally acclaimed and loved by audiences and critics alike, 9 TO 5 has now opened in Melbourne to great acclaim after wildly successful seasons in Sydney and Brisbane.

An astonishing top line cast has been assembled to inhabit these iconic and much loved roles. Marina Prior plays Violet Newstead, a smart, sassy and efficient woman who has worked all her life at Consolidated Industries. She has all it takes to run the company but there is one small issue … her boss! Casey Donovan is Judy Bernly, a newly separated, never worked before young woman who finds more than just a job at Consolidated Industries. Erin Clare plays Doralee Rhodes, a ‘don’t mess with me’ well-brought-up, bright and beautiful country gal. She may look like a push over but is anything but! Caroline O’Connor is busy-body Roz Keith, the administration assistant who is fiercely – and unrequitedly – in love with her controlling boss, Franklin Hart Jnr. played by Eddie Perfect.

“I am so excited that 9 TO 5 is heading to Adelaide,” said Dolly Parton. “I know the Australian fans will get a real kick out of this musical like people from other parts of the world have!”

Said producer John Frost for Crossroads Live Australia, on behalf of his co-producers Suzanne Jones and Ambassador Theatre Group Productions, “We’re thrilled that this hilarious and joyful show from Superstar Dolly Parton is coming to my home town, Adelaide. With our incredibly talented cast, led by Marina, Casey, Erin, Caroline and Eddie, audiences are having a fantastic time and loving Dolly’s new songs. Join us for 9 TO 5. It will be the most fun you’ll have all year!”

“If you’re looking for a fun night out , this is it.” – Sunday Mail, Brisbane

Set the alarm for a great night out at Dolly Parton’s joyous smash-hit musical 9 TO 5, featuring knock-out songs and high-flying ambitions. 9 TO 5 is pure gold carat fun! 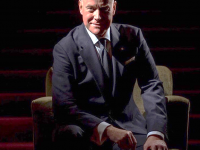