CABARET at The Hayes 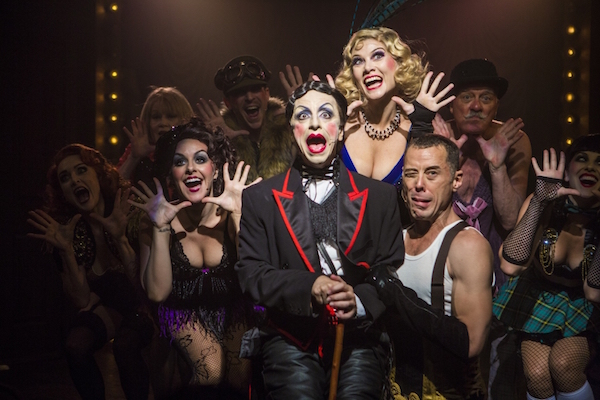 For a Naughty, Fun and Emotional Experience … Cabaret is a must-see show!

Set in the intimate Hayes Theatre, CABARET places the audience members instantly as a part of the show – the Cabaret –  with the theatre seating almost right up to the set and added tables around the stage for audience members to be a welcome part of the atmosphere.
Even before everyone is seated the cast are making their way on stage as if part of the audience too, then all of a sudden a train whistle blows and you are transported back in time to 1930s Berlin where social and political freedoms are threatened with the growing shadow of the Nazi regime.
CABARET is based on The Berlin Stories by author Christopher Isherwood who explored the freedom and social liberation of Berlin during the bustling 1930s. With music and lyrics by Kander & Ebb, CABARET became a semi-biographical portrait of Isherwood’s life, celebrating life on the edge. Beneath the fun and games of CABARET lies an ominous melody, providing a glimpse of vibrant Berlin’s dark undercurrents during the rise of Hitler. CABARET walks the tightrope of pure entertainment and serious political consciousness and for this very reason the musical continues to allure audiences. 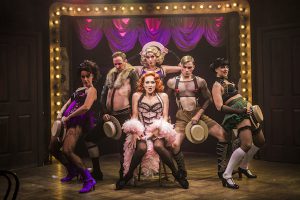 Fifty years ago in 1966 the original Broadway production made a household name of Joel Grey, as The Emcee.  Two years later a then-unknown Judi Dench stole the show as Sally Bowles on London’s West End.  However, most musical theatre fans would be most familiar with CABARET through the iconic 1972 movie musical directed by the legendary choreographer Bob Fosse and which made a star of Liza Minnelli.
This production of CABARET is not as grandiose and flamboyant as other versions, and takes a very creative, surreal interpretation of the story. However, the way it is delivered by the cast, the story line was made easy to follow and the set was simple, yet managed to create several different atmospheres without complex changes.
Without doubt, Paul Capsis is the stand-out performer. He is charismatic and so exciting and captivating as The Emcee, interacting with the audience members and taking you on the journey with him. He is the perfect choice!
The rest of the cast was a well-cast fit also, telling the whole story as well as their individual stories with so much emotion and conviction one cannot help but be completely invested in the characters, setting and mood. Every audience member felt they were indeed apart of the Cabaret. Each of the small ensemble portrayed emotion with each scene, even crying in parts highlighting the darker themes contained in the story of Cabaret.
The vocals and choreography could not be faulted either, with the Kelley Abbey’s choreo cleverly unfolding the story. Overall, I was impressed with the combination of the staging, audience interaction and choreography in the relatively a small space of the Hayes that resulted in an intensely emotional experience.
Being left amazed, inspired, a little sad and certainly wanting more, the only fault to find was that some of the big musical numbers including ‘Maybe This Time’ were not included in the production. Cabaret is a classic in the genre and is a must see for any theatre-goer!
This current Sydney season is already sold-out, with tickets now on sale for the Melbourne season from April 27 and a waitlist register available for the return Sydney season later in the year. 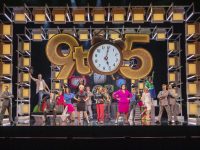 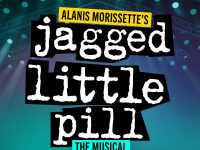 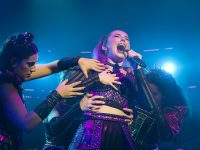