Spiegelworld announced today that its smash-hit Las Vegas show ABSINTHE will be performed on St Mary’s Cathedral Square, opposite Hyde Park, in the heart of Sydney’s CBD from September 15 2015.
Inspired by the absinthe-drenched cabarets of late 19th century Europe, ABSINTHE is an adult-themed cocktail of circus, comedy, burlesque and vaudeville for a 21st century audience. In Las Vegas, the show has been playing to sold-out audiences at the world’s most famous casino, Caesars Palace, since 2011 and celebrated its fourth anniversary in April. Last month during a performance at the Las Vegas production, Channing Tatum was inspired to jump up on stage to perform an impromptu lap dance!! 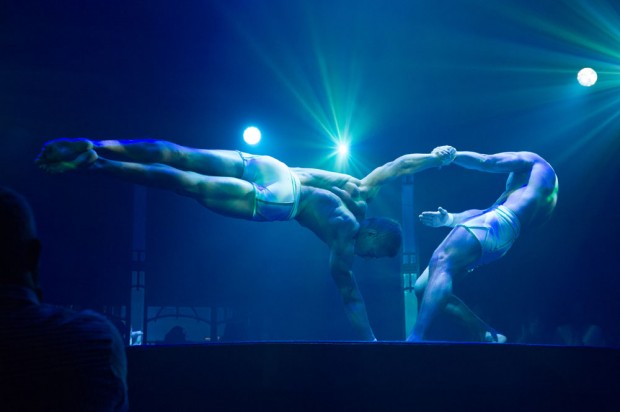 ABSINTHE is hosted by the filthy rich and just plain filthy Gazillionaire and his loyal assistant Abby Bobbins. Intoxicating songs are performed live by the seductive sylph, The Green Fairy, who is played by Australia’s own Karla Tonkich.
Sydney audiences at ABSINTHE will be treated to two new international acts, specially hand-picked for the Australian tour. Cavea Aurea consists of Laura von Bongard and Luka Clayburn, from Germany, who have created a breathtakingly sexy aerial hoop duet. Los Dos Tacos (Andrei Sizonenka and Aliaksandr Yurkavets from Belarus) will astound audiences with their heart-stopping human foosball routine on the high bar. It is believed to be the first time a double Horizontal Bar act has been performed on the intimate spiegeltent stage where the audience are just inches away from the action.

Other acts include Oleksandr Volohdin (Ukraine) building an impossibly high chair mountain; The Lost Souls (Ukraine) with their stunning acrobatic Banquine Act; the sensuous Jacob Oberman and Maika Isogawa (USA) on the Duo Straps; Michal Nowosadko and Zbigniew Sobierajski (Poland) displaying extraordinary grace and strength with their Hand Balance; and Karla Tonkich performing the famous Balloon Strip, originally created by New York burlesque legend, Julie Atlas Muz, a star of the original production of ABSINTHE.
Spiegelworld’s Impresario, Australian Ross Mollison said, “ABSINTHE is a rare opportunity to see these kinds of extreme circus acts performed in an intimate environment by some of the world’s most sexy and talented artists. Having presented ABSINTHE in the iconic locations of Pier 42 under the Brooklyn Bridge in New York City, Miami Beach, the rooftop of Melbourne’s Crown Casino and the forecourt of Caesars Palace right on the Las Vegas Strip, we are very excited to now be pitching our spiegeltent on Sydney’s St Mary’s Cathedral Square.”

For information on the ABSINTHE Australian tour please visit www.absintheaustralia.com

* VIP Ringside Tickets are available and include a seat in the front 2 rows, priority entry and a complimentary beverage.
* Performance schedule subject to change. Please refer to the website.

Group Bookings are available to groups of 6+ (Contact Ticketek Group Bookings Department on 1300 364 001 or email groupbookings@ticketek.com.au)

Show duration: 90 minutes with no interval

ABSINTHE is recommended for ages 15 and above. The performance features some nudity and strong language.